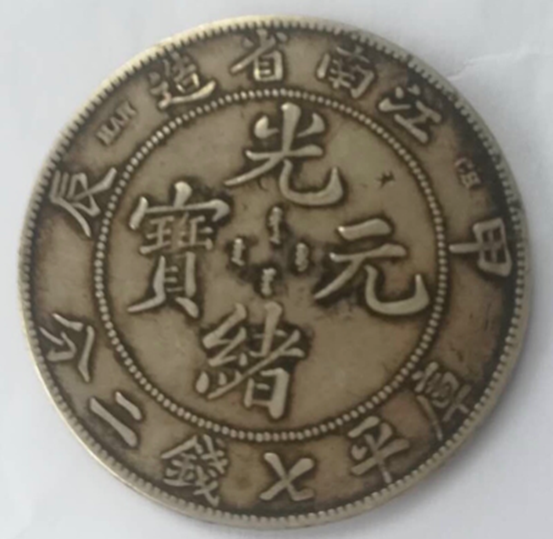 Jiangnan province made Guangxu Yuanbao Kuping with seven cents and two cents, which was minted by Nanjing Mint in the twenty-third year of Guangxu (1897), and was issued for nine years until the thirty-first year of Guangxu (1905). Among them, in 1897, the coin was called "Old Jiangnan" without counting the year, and the rest were with the years of the Wuxu, Yihai, Gengzi, Xin Chou, Renyin and Renyin 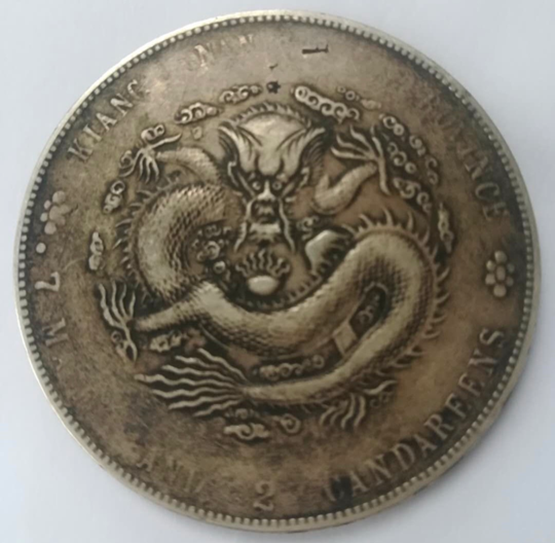 This Guangxu Yuanbao made in jiangnan province is divided into Jiachen version. On the front of the coin, the central bead circle is full of Chinese characters "Guangxu Yuanbao", the upper end of the circle is engraved with "Made in jiangnan province", the lower end is engraved with the face value of "Kuping seven money and two cents", and the left and right sides are divided into the words "Jiachen" in the dry branch year, and the upper side of the word "Jiachen" is engraved with English characters; A new dragon figure is engraved in the center of the back of the silver coin, surrounded by English introduction, and a six-point flower star is engraved on the left and right sides. On the front of coins, the fusion of Manchu and Han cultures is rarely seen, while on the back of coins, it clearly indicates the intervention of western culture. Its circulation trace is obvious, its Long Lin is clear, and it has high investment value and collection value.

In the collection market, ancient coins mostly refer to ancient Chinese coinage. In China's currency history, which lasted for thousands of years, coinage played a major monetary role until the end of Qing Dynasty. Rare ancient coins are the real objects of monetary history, and they are the witness of history. This Guangxu Yuanbao Kuping seven-money-two-cent coin made in jiangnan province is well preserved, with strong patina, great collection value and wide appreciation space. It is a very good choice for both collection and investment, and it is worthy of collectors' collection.