During the Qing Dynasty, the porcelain culture of Han working people reached its peak. Thousands of years' experience, together with Jingdezhen's natural raw materials, supervision of pottery officials, Kangxi, Yongzheng and Qianlong generations in the early Qing Dynasty, because of political stability and economic prosperity, the emperor attached great importance to porcelain and made outstanding achievements. The emperor's hobby and advocacy made porcelain production in the early Qing Dynasty superb in technology, fine and colorful in decoration and extraordinary in achievements, which fully reflected the outstanding talents and artistic creativity of the ancient Han working people. It is the most brilliant page in the long history of Chinese ceramics. 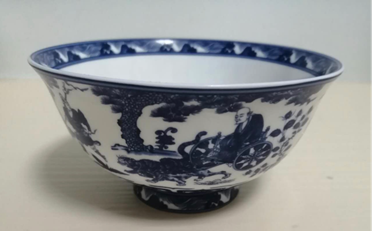 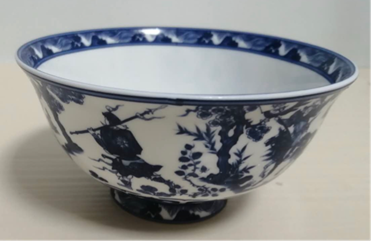 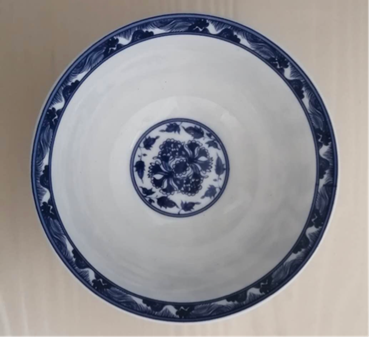 Blue-and-white porcelain has opened up a new era of transition from plain porcelain to colored porcelain, which is rich and vigorous, bold in painting style and diverse in painting levels, which is quite different from the traditional aesthetic taste of the Chinese nation. Blue-and-white porcelain has a strong aesthetic effect and style of the times. In the history of Chinese ceramics, it left an extremely gorgeous and indelible mark. 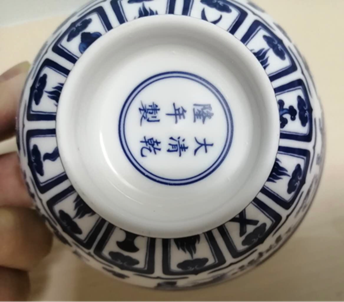 This blue-and-white Guiguzi downhill character bowl is a blue-and-white porcelain made in Qing Dynasty with the theme of Guiguzi downhill. This bowl crosses the era of Guiguzi on Qingganlong porcelain, and reproduces the image of Guiguzi's great wisdom. This bowl describes the story of Guiguzi, the master of Sun Bin, who promised to go down the mountain to rescue Sun Bin and DuGuChen, the famous Qi soldiers trapped by Yan, at the repeated request of Su Dai, the envoy of Qi State. Guiguzi sits in a car pulled by a tiger and a leopard. He leans forward slightly, and has a self-effacing, transcendental attitude, showing the attitude of strategizing and winning thousands of miles away. The cart and the mountain trees and stones constitute a spectacular and beautiful picture of landscape figures. The whole blue and white ornamentation is thick in color, full in picture, tight in ornamentation, distinct in primary and secondary, and white and delicate in fetal quality. The portrayal of characters is smooth and natural, full of charm, the rocks are dyed soundly, and the pen is exquisite and perfect. It has high historical value and collection value, and is very collectible!

This collection is now displayed and sold on the platform of the online art mall. According to the treasure holder, this porcelain bowl was handed down from the ancestors. It has been appraised by experts and teachers, and it is a peerless boutique. When our company learned that it has this rare treasure, we invited it to take this porcelain bowl. The current treasure holder is in difficulty in capital turnover. I am willing to entrust this porcelain bowl to our company to find buyers through online media. If you are interested in collecting this collection, you can call the company's telephone number: 400 686 3616 for negotiation.